← The Power of His Art: a Call for Papers
More Like a Movie Scene, part 3 →

Posted by Dancing with the Elephant contributors

Willa:  In late 2011, the Michael Jackson Academia Project posted two videos to YouTube analyzing Black or White and They Don’t Care about Us. Joie and I both thought they were interesting and well constructed – in fact, we liked them so much we published a quick post promoting them, even though we were both on Christmas vacation at the time. These videos were followed in February 2012 by two videos on the HIStory album, and again Joie and I thought they were thought provoking and well produced, and we encouraged others to watch them.

We also added the Academia Project videos to our Reading Room, providing recommendations and links, and we have kept them there ever since, even after the videos themselves were removed from YouTube for copyright infringement (something I strongly disagree with, by the way – those videos were analyzing Michael Jackson’s work, not pirating it, so I believe they should have been allowed to stay up under US copyright provisions for Fair Use). We hoped the copyright issues would be resolved and the videos would be republished.

In general, we believed the Academia Project was working to increase understanding of Michael Jackson and his art, and we wanted to support them. And I would like to continue to support them in producing positive work.

However, two days ago we received a pingback from the Academia Project website. They had just published a post accusing Joe Vogel of plagiarizing their work. I was very concerned by this because plagiarism is one of the most serious professional offenses that can be leveled against an academic – it can ruin reputations and careers – and those accusations did not square with my own experiences and observations from working with Joe. We have done several posts together over the past four years, including a post last April on the article at the center of the Academia Project accusations. I also read and provided comments on the first chapter of his dissertation, which later became that article. During the time I’ve known him, I have found him to be conscientious in recognizing the contributions of others who have gone before him, and generous in acknowledging them and expressing his gratitude for their work.

So I was deeply troubled by the allegations. I went to the Academia Project website and looked at their claims, and I found them to be without merit. Specifically, I came to the following conclusions:

First, academic writers must be scrupulous about attributing unique research data, ideas, perspectives, and turns of phrase to the people who originally collected or developed them. However, information that is considered to be common knowledge does not have to be cited. For example, if I wrote that Michael Jackson was from Gary, Indiana, I would not need to cite a source for that. And much of what the Academia Project is claiming as their unique contribution I consider to be common knowledge.

For example, the Academia Project notes that their video on Black or White includes this statement:

On 14 November 1991 the music video for Michael Jackson’s new single, ‘Black or White’, was premiered. The film was the most anticipated music video of all time and was televised simultaneously on MTV, VH1, BET, Fox and on channels around the world.

And they point out that Joe Vogel’s article includes this statement: “Michael Jackson’s 11-minute short film, Black or White, was the most watched music video premiere in television history.” This information is widely known – it has been reported numerous times, in many different sources, for more than 20 years. As such, I believe this qualifies as common knowledge.

Second, when documenting prior work, academic researchers try to cite the original source of an idea – and the Academia Project is not the original source for many of the ideas they are claiming as their own. For example, they point to this statement in their November 2011 video:

As the ‘Black or White’ video progresses, Michael sings “I ain’t scared of no sheets’ while bursting through imagery of a Ku Klux Klan cross-burning rally.

The ‘sheets’ referred to are the white hooded robes of the hate group.

They claim it is the source for this statement in Joe Vogel’s 2015 article: “The sheets Jackson refers to, of course, are the sheets of the Ku Klux Klan.” To me, this is a fairly obvious interpretation and doesn’t need to be cited. (In fact, I mentioned that the “sheets” referred to the Ku Klux Klan in M Poetica, published six months before the Academia Project videos, and I did not cite anyone.) However, Joe wrote of this connection in Man in the Music, which was published before the Academia Project videos were posted. Here’s what he says, in an image from page 159 of his book: 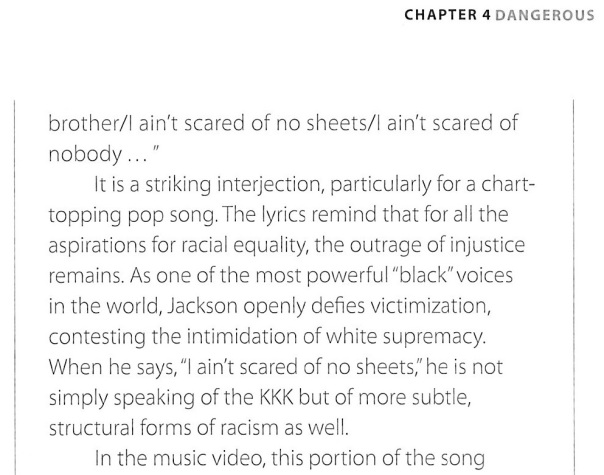 Again, I think the reference to the Ku Klux Klan is common knowledge and that Joe doesn’t need to cite anyone. However, if he did decide to include a citation, the Academia Project would not be the original source. I would need to do some research to find out who was, but I know Eric Lott mentioned it in “The Aesthetic Ante: Pleasure, Pop Culture, and the Middle Passage” – an academic article published in the spring of 1994 – and Armond White mentioned it even earlier, in a newspaper article that I believe was published soon after the video’s premiere in 1991.

Third, while the Academia Project’s videos and Joe Vogel’s article share some similar background information, those areas of overlap are only a tiny fraction of the overall scope of Joe’s article. For example, while the Academia Project focuses primarily on the political history of race and the civil rights movement, Joe takes a more theoretical approach and looks at the constructedness of race. He also focuses on constructions of gender, as his title suggests:  “I Ain’t Scared of No Sheets: Re-screening Black Masculinity in Michael Jackson’s Black or White.” Gender isn’t addressed in the Academia Project video.

Finally, it is certainly possible and even likely for people working in similar areas, studying similar texts, to draw similar conclusions. For example, Isaac Newton and Gottfried Leibniz both developed the branch of mathematics called calculus at approximately the same time, working independently of one another and using very different notation. In another example, Samuel Johnson and Voltaire published remarkably similar novels (Rasselas and Candide) at the same time, though they lived in separate countries and wrote in different languages. Johnson himself remarked that if their books hadn’t been published simultaneously, neither author would have been able to counter the charge of plagiarizing the other.

My point is that as Michael Jackson’s stature continues to grow, the field of Jackson studies will inevitably become more crowded, with more and more people publishing analysis and posting opinions of his work. So there is bound to be some stepping on toes and jostling of elbows. However, while we may find that we disagree on some things – even strenuously disagree – it is imperative that we treat one another with respect and generosity of spirit.

I have seen too many instances of passionate fans allowing their passion to threaten or destroy something positive. The Michael Jackson Fan Club (MJFC) was a wonderful resource for disseminating information and sharing ideas. However, it was destroyed in large part by rival factions who could not settle their differences. And I was very disheartened to read a news article last week that a memorial in Germany may be dismantled because of ongoing disagreements between fan groups. This does not honor Michael Jackson’s legacy.

I would like to end by letting Joe respond to the Academia Project claims in his own words, from a post he published yesterday:

To be clear: My article on “Black or White” is not in any way derived from this fan’s videos, blogs, or other commentary. It is, however, indebted, to the scholars and critics I mention in my piece …

Over the years, I have interacted with numerous scholars, journalists and critics doing great work on Michael Jackson. They are overwhelmingly wonderful, generous, and civil, even when there are disagreements. I have had similar experiences with most Michael Jackson fans and fan groups.

It is my continued hope that those engaged in … attacks will instead focus on more positive ways to productively engage with Michael Jackson’s life and work.

About Dancing with the Elephant contributors

Joie Collins is a founding member of the Michael Jackson Fan Club (MJFC). She has written extensively for MJFC, helping to create the original website back in 1999 and overseeing both the News and History sections of the website. Over the years she conducted numerous interviews on behalf of MJFC and also directed correspondence for the club. She also had the great fortune to be a guest at Neverland. She has been a Michael Jackson fan since she was three years old. Lisha McDuff is a classically trained professional musician who for 30 years made her living as a flutist, performing in orchestras and for major theatrical touring productions. Her passion for popular musicology led her to temporarily leave the orchestra pit and in June 2013 she received a Master’s degree in Popular Music Studies from the University of Liverpool. She’s continuing her studies at McMaster University, where she is working on a major research project about Michael Jackson, with Susan Fast as her director. Willa Stillwater is the author of M Poetica: Michael Jackson's Art of Connection and Defiance and "Rereading Michael Jackson," an article that summarizes some of the central ideas of M Poetica. She has a Ph.D. in English literature, and her doctoral research focused on the ways in which cultural narratives (such as racism) are made real for us by being "written" on our bodies. She sees this concept as an important element of Michael Jackson's work, part of what he called social conditioning. She has been a Michael Jackson fan since she was nine years old.
View all posts by Dancing with the Elephant contributors »

← The Power of His Art: a Call for Papers
More Like a Movie Scene, part 3 →

Tell us what you think... Cancel reply